What is a Breeding Bird Atlas?

A Breeding Bird Atlas is a project that results in mapping the distribution and relative abundance of breeding birds over a large geographic area such as a province, state, or country. Atlases follow a standardized methodology designed to be repeated at 20-year intervals which allows changes in bird populations to be tracked over time. Saskatchewan’s Breeding Bird Atlas will be an open access comprehensive digital account of the status of breeding birds in the province. The Saskatchewan Atlas will provide an invaluable resource to industry users, governments, conservation organizations, academic institutions, and the general public for purposes spanning the spectrum from conservation planning and environmental assessments, to environmental education and research projects.

What can birds tell us?

While anyone with a pair of binoculars and bird watching experience, or even a desire to learn about birds, can participate, it does help to have some experience and familiarity with how to identify birds. You don’t need to be an expert–we just ask that you are confident in the identification of the birds that you report.

How Does the Atlas Work?

The Saskatchewan Breeding Bird Atlas is a scientifically designed, five-year project to assess the status, distribution, and relative abundance of bird species that breed within Saskatchewan. Data collection for this Atlas will begin in 2017 and continue through summer 2021. Pivotal to Atlas success is the participation of large numbers of volunteer birdwatchers that contribute their time and skills by gathering data. Breeding Bird Atlases have been produced in many European countries and throughout states and provinces in North America. Some jurisdictions have completed two or more breeding bird atlases. This will be the first Atlas focused solely on birds that breed in Saskatchewan.

Atlases typically are repeated every 20 years to document changes in bird distribution that may reflect changes in forestry, agriculture, urban expansion, climate change, natural disasters, bird feeding, other natural or man-made forces, and ultimately ecosystem health. The Saskatchewan Breeding Bird Atlas will help establish a baseline against which future change can be compared.

The Saskatchewan Breeding Bird Atlas will be a living document and a legacy for all Saskatchewanians. Over the course of the next five years, the various data pages of this website will be constantly updated as we receive more and more data from atlas participants. The maps that will be displayed on this web page will be interactive, allowing you to view a specific region or square or the province-wide results for any given species. After completion of data collection, we will publish an online book which will include various spatial analyses and refined abundance estimates. The data themselves will be stored in a complete and fully-searchable database containing details of specific observations that will be available for use by scientists, environmental assessors, biologists, municipal planners, students, and others.

How Do You “Atlas” for Birds?

The first and most basic bird atlassing method, called “general atlassing”, consists of finding evidence of breeding for as many species as possible in a 10km x 10km square. For example, singing birds in their breeding habitat during their breeding season are recorded as “possible” breeders; pairs of birds, agitated or displaying birds are “probable” breeders; and nests, distraction displays or fledged young are recorded as “confirmed” breeding. These data provide information on the distribution of birds throughout Saskatchewan.

The second bird sampling method is called point counting. This method is used to estimate the relative abundance of bird species across different squares to give a picture of where the populations of each species are concentrated. Collecting abundance data by point counts will be optional for atlassers, but will be encouraged for experienced birders, provided they can identify most birds in their area by song.

The third sampling method involves collecting more precise documentation of the breeding sites of rare species and colonial species. Participants will be encouraged to fill out nest record cards with detailed information for any nests they find. However, particular emphasis will be placed on species that are either rare in Saskatchewan or regionally rare, as well as species that nest in colonies such as American White Pelicans, Common Terns, and others. Details of breeding locations and the size of colonies are requested on special data forms.

Atlassing is fun and easy to do! If you have access to a pair of binoculars and can take the time to identify birds this project is for you. Participating in the Atlas is a great way to improve your bird identification skills while contributing to citizen-science that has tangible conservation outcomes. We simply ask that you are confident in the identification of the birds that you report; if you are uncertain of the identification of a particular bird you can always seek assistance or submit photographs. Our goal is to get 20 hours of “general atlassing” done in each square over the five-year atlas period (2017-2021) so it’s easy to make every bird walk count!

Despite Saskatchewan’s large size and sparsely populated landscape, there exists a rich ornithological history in the province. From early European explorers collecting specimens to modern-day citizens contributing observations to natural history societies and citizen-science projects, the diversity and quantity of birds found here has long captivated those fortunate enough to experience it. The Blue Jay , published continuously since 1942, has been an important resource for naturalists and researchers alike to share local natural history observations. Our understanding of bird distribution in Saskatchewan was greatly enriched with the publication of Alan Smith’s The Atlas of Saskatchewan Birds in 1996, a huge effort compiling historic and contemporary observations across the province. The 2017-2021 Saskatchewan Breeding Bird Atlas will build on this solid foundation. 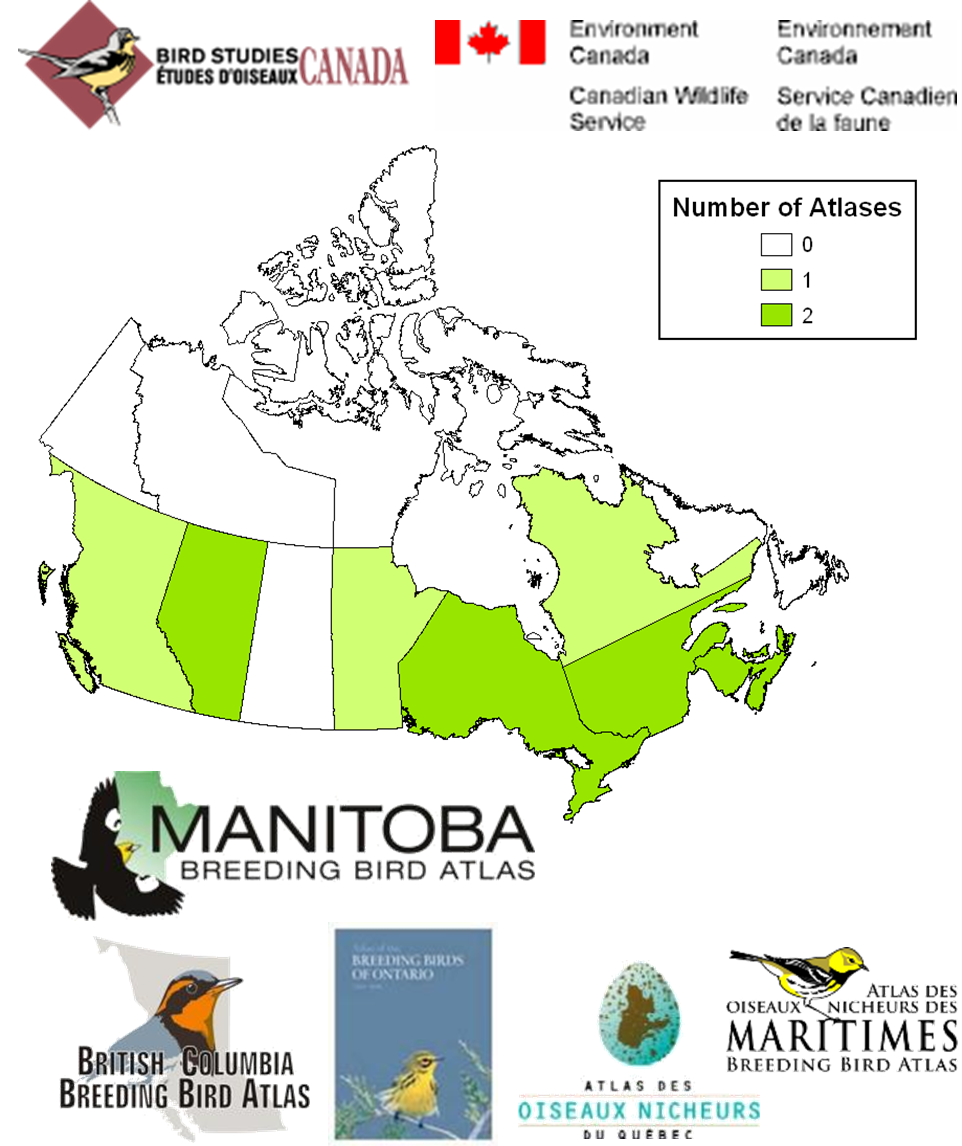 The National Atlas Program is a partnership between Environment Canada, Birds Canada, provincial governments, natural history organisations and the private sector. It began in 2000, with the second Ontario Breeding Bird Atlas, which developed a successful business model combining the complementary strengths governments, non-profits, grass-roots and corporate businesses. That model has since been effectively replicated in six Canadian provinces. Each provincial-scale breeding bird atlas is a minimum eight-year undertaking―a start-up year, five years of field surveys, and two years of publication. The average price tag is $250,000 per year. That financial cost is matched by skilled volunteer citizen scientists―members of the provincial nature societies and the birdwatching public―who typically contribute >10,000 hours per year conducting field surveys. Breeding Bird Atlases under the Birds Canada-Environment Canada national program have been completed or are underway in Ontario, the Maritime provinces, British Columbia, Manitoba and Quebec. More are in the planning phase for other provinces. National atlas program results drive conservation policy, species at risk recovery, habitat management and stewardship, and land acquisition. To learn more, and to participate, click here. Canada’s National Atlas Program is strongly represented on the North American Ornithological Atlas Committee (NORAC), a group which facilitates and encourages the use of bird atlases for research, monitoring and conservation of birds in the Americas.